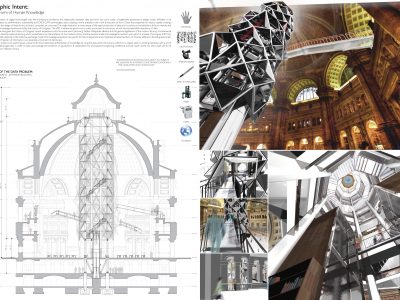 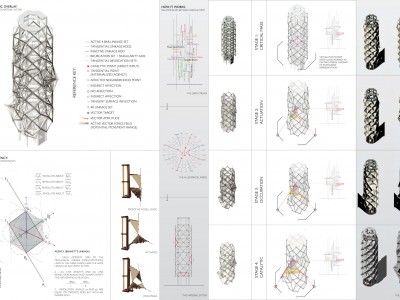 The LOC is where we give form to, codify, and access an enormous, almost incomprehensible repository of data. It acts as a centralized hub for national information storage and identity yet it remains distinctly hierarchical in its collection & acquisition policies. Recent policy shifts, as signified by the acquisition of the entire Twitter archive, have brought the library into a new era, an era which redefines the very formal composition of knowledge upon which it was constructed. Formalized hierarchical knowledge classification still has a distinct place in the National library; the same cannot be said for these new forms of data archival. The lack of any hierarchical filtration or selection device breaks these new forms of information and data collection from their predecessors, marking a shift in the Library of Congress’ historical model of knowledge acquisition from a ‘closed/ hierarchical’ to a ‘collective/ exchange’ model of learning. This shift necessitates a re-interpretation of the modern Library, and the classical model of knowledge acquisition upon which it is based. The singular shift from a linear/ hierarchical model (classical) to the collective exchange model of knowledge acquisition has speciﬁc formal consequences and constitutes an advanced form of Thomas Jefferson‘s founding democratic ideology, the notion that freedom of information is an essential component of democracy.

Outside the domain of the classical topos of knowledge lies an endless plan of present and future intellectual pursuits, a future foundation for generations to come, and the intent of this project is to superimpose a dynamic & robust alternative presentation of knowledge by using the data which the Library collects on a regular basis in elastic operation with a set of material behaviors (agencies) in order to both acknowledge the presence of (giving form & classification to) and advance burgeoning intellectual pursuits (open access to) which have yet to be concretized in form by our National Library.

The architectural intervention acts as a catalyst for future knowledge cultivation in areas of research which lie outside the classification system already in place at the library. Emerging fields of study like Science Fiction, Bio-informatics, Evo-devo Biology, Nueral Science, etc. are brought back into the fold and immediately [re]-considered viable forms of information for collection by the library. The project is kinetic to reflect both the always occurring development of knowledge flows and provide spatial relief in the form of temporarily occupiable ‘pnyx’ (focused discussion) spaces to literally and physically act as an incubator for emerging research fields.