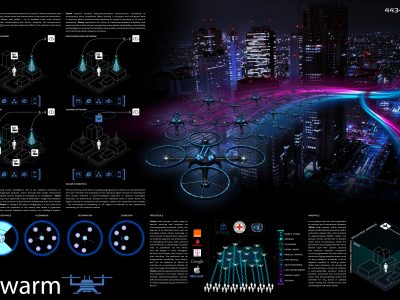 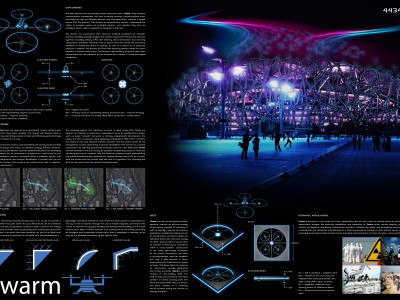 Wireless networks have revolutionised data flow, in terms of medium, platform and infrastructural delivery. Urban areas are infested with a vast array of transmitters, receivers, satellite dishes, and cables – all to facilitate three main network typologies: centralised, decentralised and ad-hoc. However, this infrastructure remains immobile, YOU move between networks! What if the network could move WITH you?

iSwarm operates using swarm intelligence. This is the collective behaviour of decentralised, self-organised systems, which, through their simple interactions and a lack of centralised control, display an emergence of “intelligence”. iSwarm will use swarm theory’s four cybernetic rules of interaction – angle and distance, alignment, separation, and cohesion, to provide a live feedback via on-board sensors, enabling iSwarm to navigate 3D space intelligently.

iSwarm provides a range of services via pre-programmed protocols. These operate at an individual level, such as mobile phone coverage, up to government agencies’ surveillance or emergency services. iSwarm is administered and marketed in the same manner as existing devices, with drones sold as consumer products, or employed by governments or N.G.O.s.

To maintain iSwarm, consumers receive a personal iNest just as they would a mobile phone charger, to recharge their drone via Wireless Energy Transfer. However, urban areas require public iNests to provide additional locations for recharging and maintenance. iNests are an architectural skin-based autonomous infrastructure constructed by the drones, perching upon existing structures, with its distribution network calculated using a mapping system that utilises Delaunay Triangulation and Voronoi Tessellation in parallel with the live data-stream from the drones. This results in an infrastructure that is adaptive, intelligent and semi-permanent.

iSwarm represents the future of telecommunications evolution drones data swarm theory, and would provide a data network possessing unparalleled adaptability, sustainability and intelligence, and one that facilitates ultra-mobile virtual connectivity, orientation and interfacing within physical territories.