PRESERVING BOTH CULTURAL AND BIOLOGICAL DIVERSITY

PRESERVING BOTH CULTURAL AND BIOLOGICAL DIVERSITY 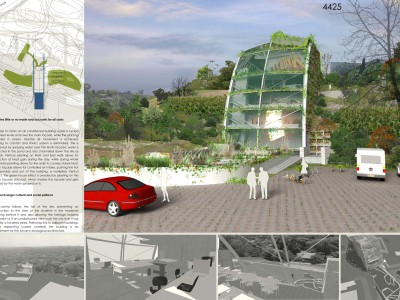 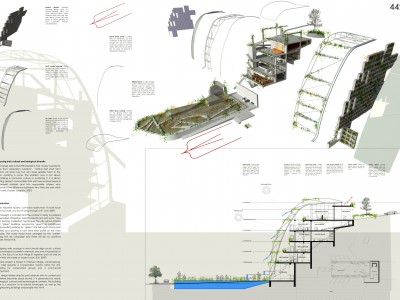 In an Industrial society, conviction states that “if brute force does not work, you’re not using enough of it”. (Orr: 2007)

No foresight is included and the context is rarely considered or excluded altogether. Industry prevails and with some “new and exciting marketing” techniques the city will be littered with “green” buildings, serviced by “green” air conditioners and providing parking for “green” 3.5l 4×4’s (with hemp seat covers) and sporting a new shiny solar panel on the main façade. The world would have changed for the “better” during the ad campaign and there will be no sacrifices made. Trends end.

Designing with ecology in mind should align social, cultural and ecological contexts in harmony and over long periods of time. The focus is on how things fit together and not only on how they are made or made to look. (Orr: 2007)

Project is based in Parktown Ridge,Johannesburg. The brief requests an Educational Centre within the city, catering for conservation groups and a commercial component. The design relates directly and indirectly with its context and therefore becomes place bound. It is generated by social, ecological, cultural and technological contexts. The building form is a reaction to its natural landscape, as well as the neighbouring buildings and people who visit it.

Preserving both cultural and biological diversity
Peter Senge said in The Fifth Discipline that “today’s problems come from yesterday’s solutions”.  Noting that short term solutions will work now but will cause greater harm in the future, creating a cycle. The problem now is not about rationalizing a consumer culture or sustaining it. It is about creating decent communities that will have evolved beyond consumerist mindset and into responsible citizens who understand the difference between who they are and what they have. (Tanzer, Longoria: 2007)

Creates little or no waste and accounts for all costs
In order to mimic an air conditioned building, water is cycled between levels and over the main façade, while the planting provides a screen. Greater air movement is achieved, adding to comfort and HVAC system is eliminated. This is achieved by spraying water over the North façade; water is collected in the pond and also channeled down the site as rainfall. Vertical planting on West and East walls allows for reduction of heat gain during the day, while during winter perennial planting allows for the walls to convey stored heat. North façade allows for controlled air intake, pushing the hot air upwards and out of the building, a multiplied Venturi effect. The green house effect is avoided by planting on the North façade and roof, which shades the façade and gets cooled by the water sprayed on it.