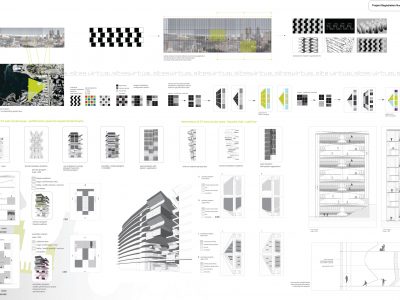 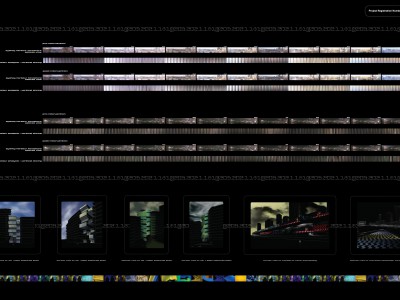 The global webcam network is a component of a larger and politically strategic system that can also be utilised to perform complex tasks in conjunction with those for which it was originally intended, such as the design of built form. The use of the webcam as a design tool challenges the current paradigm for generating architectural intervention, asking it to become more consistent with contemporary urban living.

1.  By the application of a pattern to the camera view.
The pattern acts as a generative tool for the design of form and the assignation of program. It also acts as a visual instigator of the disjunction that exists between the virtual and physical sites. Significantly, this process departs from traditional design techniques by inverting the commonly accepted procedure.  The design process is initiated from the perspective view and proceeds to elevation and then finally to plan.

2.  Through the use of colour. The assignation of new strategic colour values to the inserted program will respond to the constant flux of an urban environment.  Scientific imaging software is used to test the effect of the intervention via colour analysis over a range of temporal contexts.

The application of design elements to the virtual image has profound formal repercussions for its real-time counterpart. The inevitable discrepancies that arise in the translation from the virtual to the real can offer unprecedented opportunities for the urban designer.