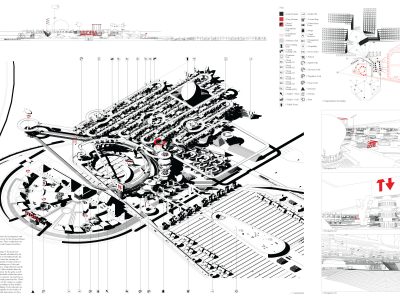 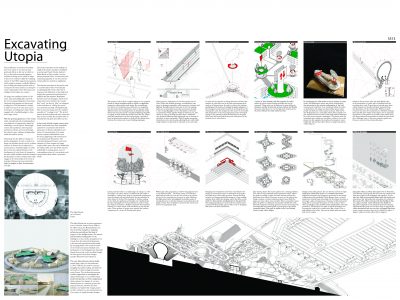 This utopian project speculates on the makeup of a high-tech business incubator established in and around Claude Nicolas Ledoux’s Saline Royale in France under a not too distant projected future. A future where the continuing migration of our lives into the virtual realm has reached an equilibrium.

The extreme stereotype of the geek is used as a model citizen where work and play is indistinguishable. Such is the level of obsession and dedication to their high-tech hobby, their professional and leisure lives collide in the first instance. Boundaries then blur and soon disappear. Those in the utopia who cannot embrace the concept that “work” can also be “play” are relegated to the underclass of a Keeg, the reverse of a geek both in mentality and alphabetically. This servant class hangs onto the outdated mentality of “working to live”. The lack of interest in their professional roles means that they are free to tackle the mundane tasks of everyday life that geeks have little time for.

Within this utopian society, geeks circulate the urban realm using linear paths which allow them to delve into the virtual realm at will without the fear of accidents. Gone are the traditional notions of circulation such as sidewalks, roads and cars which caused the virtual to be labelled as distractions during our daily commute. Instead, the proposed system integrates this fundamental means of communication by restricting non-essential decision making in the built environment.

This radical yet simple change demands a complete rethink of current building typologies provoking novel architectural inventions which address not only the prevalence of the virtual but also the trending cultures that has been made possible as a result.