Gazebo between the world

Gazebo between the world. 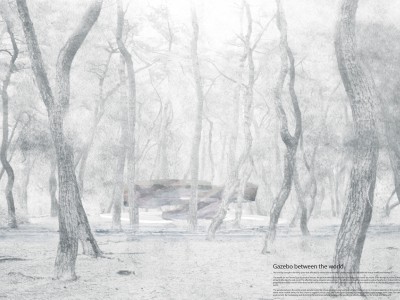 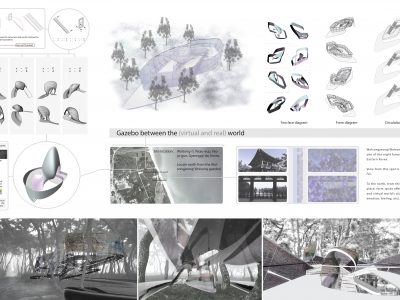 My one big thought is forming space that affected by virtual and real world’s climate(mood) to cope with the virtual world’s environment.

The world are nor formed just by physical factors. Reciprocal interaction between force and particle forms the world. Even though it is hard to feeling the virtual world, the virtual is affecting the real world. The affection can be negative and positive. If the affection is negative we need to notice the affection to deal with negative effect ; like people preparing the winter season when they feel the cold environment. And if the affection is positive, we also need to know to sharing the pleasant affection that brings us better world.

The gazebo between the world enable people to feel the virtual world by using two face surface. One face’s tint is changing depends on the words used on the web. If the the words mean violent sense, the tint is turn to negative mood color. And if the words meaning is positive, surface’s color turn to warm color. The other face shows real world’s environment. By overlapping and distorting the two faced surface, people in the gazebo can vividly experience the virtual and real world.