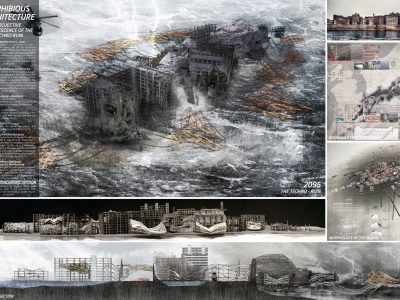 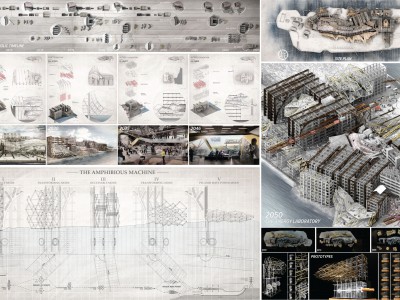 This project envisions a post-industrial ruin – Hashima Island in Japan, will still be functional without people in 2095. Rather than following the usual trajectory of preservation, the proposal make use of the island’s context and climatic conditions to propose an creative intervention that anticipates the process of decay and harvests energies and by-products.

The re-inhabitation of the island will started through a renewable energy laboratory that continues the island’s previous identity of energy harvesting (coal mining). The proposed architectural system – the Amphibious Machine, is a system which can harvest energy through wave motions as well as create new spaces that are extended from the existing building of the island

Three design objectives:
1. Resurrection
– to preserve and reinforce specific architectural qualities that signify the identity of the island

2. Adaptation
– to allow dynamic spatial changes according to the occupants’ needs, and also for the fast-evolving energy industry

3. Energy Production
– to test prototypes for power generation and establish the island as a self-sustaining city.

Embracing the natural process of decay, the design intervention is not a one-off built entity, but a metamorphic process that encourages continuation of Hashima Island’s identity and functionality. Ultimately, the project anticipates the obsolescence of the island again, while the Amphibious Machines remain, continuing to harvest energy and establish the island as a techno-ruin.

Amphibious Architecture, is a site specific proposal that synthesize Hashima Island’s history, context, climatic conditions, and current technology of renewable energy. In parallel to the digital design process, a lot of physical models were made in order to understand constraints and potential. It is believed that a continuous synthetic process between the virtual and the physical world, shall enlighten one the most in the search of best possible solution in the intertwining complex issues of our time.