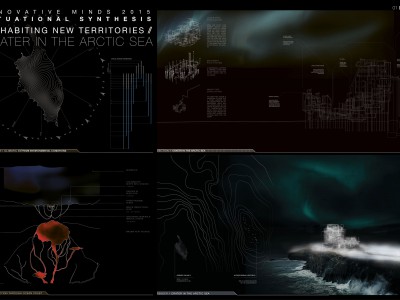 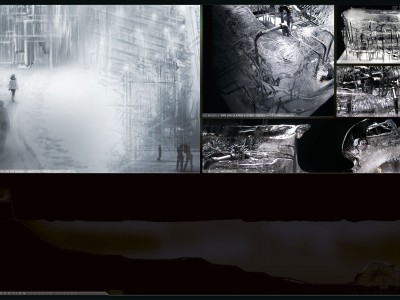 The project is a systematic embodiment of a crater in the arctic sea, performing as a generator for habitable space in an extreme climatic a environment. The Site – a non inhabitated island north from Iceland in the Arctic Sea with an average monthly temperature between 0° C in summer up to minus 50°C in winter. Also very strong winds are prevailing, mostly coming from southeast. As the island is located above the Polar Circle, during winter Polar Nights are occurring – which means 24 hours without sunlight on the island – the longest and coldest nights of winter.  During those A special natural event is occurring  the Aurora Borealis. The Aurora is a colorful light event in the sky, which is AN unforeseeable NATURAL EVENT, only happening above or directly at the border of the Arctic Circle. The coloured lights occur when solar wind particles, coming from the sun are entering the earths atmosphere. This causes a colourful wind, lightning up the sky and attracting many people to visit the crater, for gathering and public viewing of those rare natural events.

The Crater in the Arctic Sea is performing as shelter for human to be in protected and controlled environment, during their observations of the Aurora Borealis. The energy to produce the controlled and inhabitable environment is gained by a circular pipe system. naturally Heated water is collected nearby the island from hydrothermal vents in the ocean crust and is lead into an inner pipe system into the Crater, to create warm environment inside the center core. The cooled water is brought back into the sea by an outer pipe system, which also includes nozzles to spray water out onto the main pipe construction. The effect of that is the Crater to grow at cold temperature, as the spraying water is turning into ice and encloses and shelters the inner core from external environmental influences.

The Crater is accessed through a path system leading through the outer pipe system – cold enclosed and corridor-like spaces – into the warm center core. in summer the Crater is an externally and exposed open event hall on the island for public viewing of the Aurora Borealis, while during winter it is enclosed by ice, sheltering and creating controlled environment in its center core, for human during their gatherings.