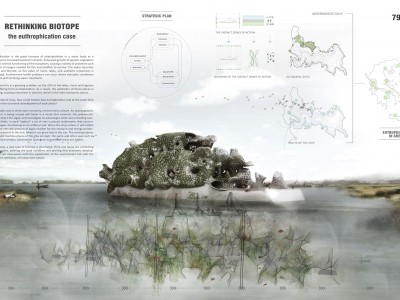 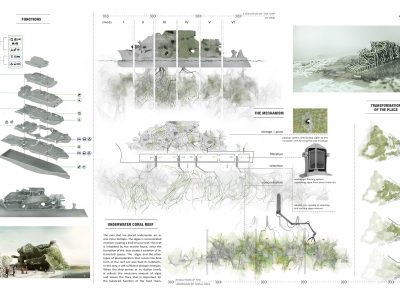 Eutrophication is the great increase of phytoplankton in a water body as a response to increased levels of nutrients. Enhanced growth of aquatic vegetation disrupts normal functioning of the ecosystem, causing a variety of problems such as a lack of oxygen needed for fish and shellfish to survive. The water becomes cloudy and blurred, so the value of rivers, lakes, and aesthetic enjoyment is decreased. Furthermore health problems can occur where eutrophic conditions interfere with drinking water treatment. In Greece this is a growing problem, as the 25% of the lakes, rivers and lagoons are suffering from eutrophication.

As a result, the aesthetics of these places is decaying, causing a decrease in tourism, which is the main economic source. In a period of crisis, how could Greece face eutrophication and at the same time increase the economic development of each place? The project acts in three axes: economy, environment, culture. An oceanographic ship that is being reused will travel in a route that connects the problematic areas, collect the algae, and investigate its advantages while also providing touristic facilities. In each “station” a set of nets is placed underwater, that concentrates algae, functioning as an artificial reef. When the ship arrives, it will collect from the nets the amount of algae needed for the research and energy production and store it in the hull, where it can grow due to the sun. The existing laboratories and machine places of the ship are kept the same and other uses such as conference centers, observation spots and recreational areas are added.  In this way, a new type of biotope is developed. Flora and fauna are cohabiting with humans, pushing the local economy and proving that economic development is not interwoven with the exploitation of the environment but with the harmonic symbiosis of human and nature.