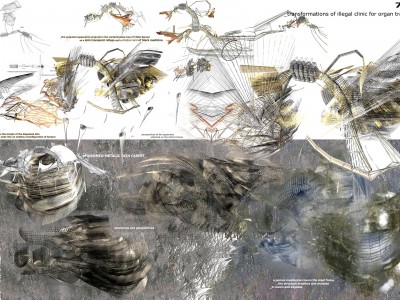 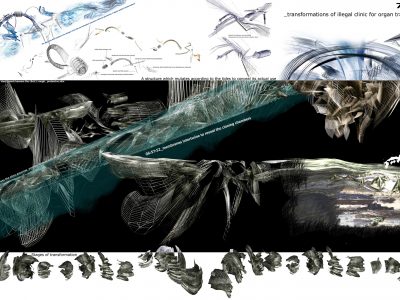 The project constitutes a spatial interpretation of the novel “Neuromancer” by William Gibson, which became the manifesto of the cyberpunk generation in the 1980s. The hero, once a talented computer hacker, suffers from a nervous system disorder, as a punishment for stealing from his employer. Unemployable, addicted to drugs and suicidal, the hero desperately searches “black clinics” in the virtual underworld Chiba city for a cure, in order to regain his life back.

The project presents one of those “black clinics”, which are trapped in the contaminated area of Chiba sprawl, functioning as both a transparent refuge and a shadow land of “black medicine” (illegal drugs). The Chiba city coastline and especially the Cape Inubozaki at the east end of the Choshi Peninsula (eastern Japan), marking the entrance from the Japanese capital city of Chiba Prefecture to the underworld of Chiba City, becomes the dance floor upon which a choreography of scattered realities and virtualities is inscribed.

The sea surface becomes the chromed metallic carpet upon which an apparatus unfolds, acting as a structure which breathes and mutates, camouflaging itself accordingly. The organism/apparatus adjusts to the changes of the tide and unleashes networks of diverse geometries in the form of irregular spatial transformations. Its upper levels gently sink below sea level concealing the location of the structure, while its upper levels expand, creating spaces for illegal skin cloning and experimentation.

The clinic’s form, a distorted mandala of skins, consists of layers upon layers of steel panels, covered by a porous membrane. This rough and protective, yet flexible skin allows for the structure to adopt multiple configurations, as membranes intertwine to reveal -or conceal, in case of an emergency- the cloning chambers.