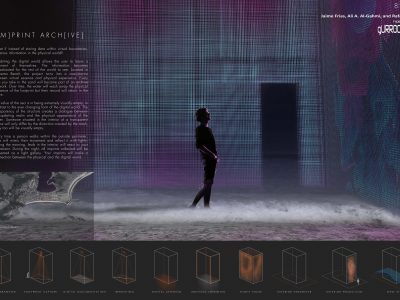 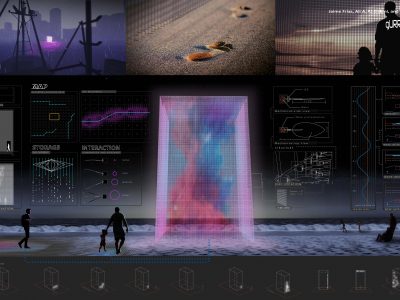 The virtual world has no rules. Rules only appear when code is written in a program to declare its conditions. This codes then becomes data, fading away only to be stored in a closed location where occasionally someone decides to collect the information. What if instead of storing data within virtual boundaries, we store information in the physical world?

Inhabiting the digital world allows the user to leave a fragment of themselves. The information becomes broadcasted for the rest of the world to see. Located in Ipanema Beach, the project turns into a coexistence between virtual essence and physical experience. Every step you take in the sand becomes part of a network that records a presence in time and space. As people walk in the sand they create footprints that vanish into the past but retain their figure for the future, allowing their path to be in both realms. The footprints become a recording of an existence.

The perfect geometry of the project embodies the sense of infinity and an impression of an existence that has always been there. The transparent structure creates a dialogue between a spiritual world and the physical appearance of the water, presented in the form of a light show.
Beaches are physical spaces used for entertainment. Ipanema Beach, located in Rio de Janeiro, lies amidst the development of the city and the Atlantic Ocean. The beach is used for visiting and tourism but amongst the entertainment, people constantly fill it with their presence without being aware of the damage the growth of the city implies in nature. The value of the sea is in being extremely visually empty, in contrast to the ever changing form of the digital world.

The sand is changed by the movement of the people. The sand washes and fades away, symbolizing the thoughts, comments, shares, and ever-updating form of the internet. Similar to the digital world, someone would be able to inhabit the interior space and leave their “mark” so as to share it with the world outside. The library now becomes an element of the beach’s soul. Rather than feeling closed in your own virtual world, you now feel open to share your information and leave a mark on the physical world.