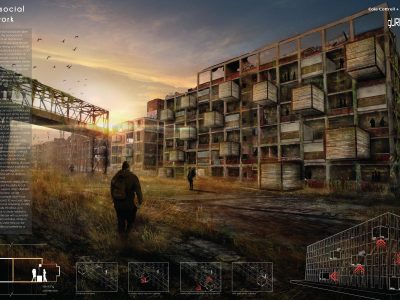 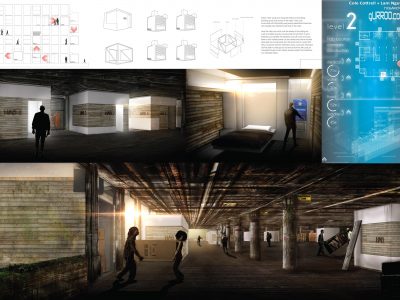 Once the largest auto production plant in the motor city, the packard plant currently stands as an abandoned symbol of what once was. since the late 1980’s the once thriving auto industry of Detroit has accounted for the loss of jobs and homelessness of a population of nearly 17,000 people currently living without basic amenities. shelters in the Detroit metro area turn away nearly 300 people on average, per night and while the city is home to over 35 work/housing programs, the transient population only continues to rise by an estimated 7% per year. not just another social housing concept or typical nomadic shelter, the podsocial network attempts to serve as a full reintegration into society for its users. borrowing concepts first from social networking platforms such as the location based anonymity of yik yak, and the real time data gathered by Netflix on its users in order to create a profile of preference, tracking the history and suggesting something relevant, we wanted to create an interface that would enable a connection via location of users and needs within the 3,500,000 sq. ft. packard plant. in this way, the virtual epoch is so vital to the enabling of this reintegration. exterior “utility” pods move along the exterior of the building providing goods and services to the interior “hab” pods constructed within the building using existing refurbished infrastructure and assembly lines. the utility pods which scale the exterior of the building are cued and called using the console panel that will attach to each habitation pod created. the habitation pods will consist of a basic frame to which material panels can be created and surface mounted alongside the console panel which links each pod to a system that allows connection between habitations, basic construction information and the ability to order goods and services from the utility pods, all channeled through a basic, identity sensitive profile of the inhabitants
most immediate needs.