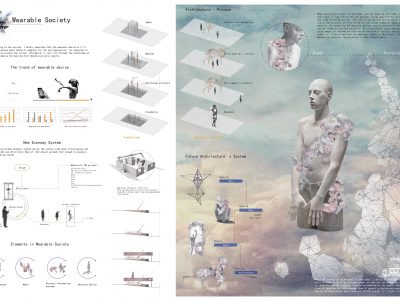 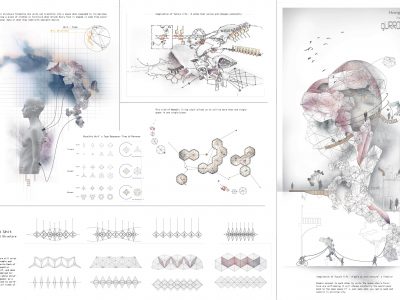 According to the current, I boldly speculate that the wearable device will finally replace smart phone or computer for the next generation. Its characteristic is to project the virtual information in real life, making the big data be distributed rapidly. In this situation, the newly formed economic system can be the custom trade ways of businesses and Makers who use 3D printers. Data of individuals spreads fast enough to become a self-making system. When every single object is self-made, can the space be self-made, too?

If the architecture’s structure becomes the track of the 3D printer, the machine can be smallerized, operating on the structure while printing out the needed shapes of space or a specific material. By connecting the wearable devices, massive amounts of data and demands can be instantly received and built. The architectural space constructed by the large amount of information will be Free Form. In addition, thanks to 3D printer’s Autologous Metabolism function, the structure is even transformable. The structure will exist by being movable and molecular units. Each of them can expand or shrink itself, and when they’re combined together, the whole structure will appear as a curved surface to correspond with all kinds of shapes. The integral structure formed by the units can transform into a space when expanded to its maximum, while becoming a piece of clothes or furniture when shrunk.It’s a protable structure.

This kind of Nomadic living style allows us to utilize more than one single space in one single place.While two people can be attached to each other’s device to increase the number of the units in order to build up a bigger space, so that you can share the room. Additionally, with the even more complex information combined by two people, the more various kinds of forms can be demonstrated. When 50 people’s devices are connected, a building can be constructed; when there are 100,000 people, it’ll turn into a urban that varies and changes constantly.