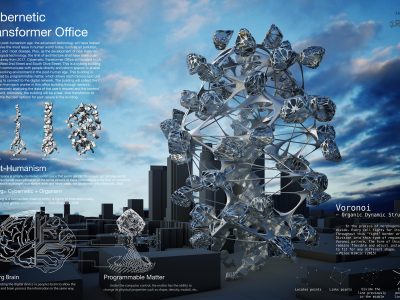 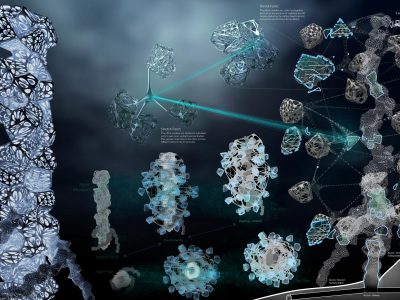 In this project, the thesis is forcing on the potential creativity of architecture design in the future world. Which is called Post-Humanism. Like what we know today, Cyberspace is a highly contested social space and exists parallel to our social realities and increasing the collection with us more and more everyday.

In the post-humanism age, the advanced technology will have helped people solve the most issue we are facing today, such as air pollution, city traffic and  most disease. Plus, as the development of new materials and biological technology, the limit of architecture shall have been push much far away from 2017. The project will located in LA, between West 2nd Street and South Olive Street. Cybernetic Transformer Office is a building which can communicate with people directly and reform spaces to enable the best working environment in the post-human age. This building is constructed by programmable matter which one kind of super advanced material which has the ability to change its physical properties such, shape, color, density, conductivity and so on. and each atom of it is linking with the digital network. This material allows each microscopic unit of building potentially is connecting the ole cyberspace world.

At meantime, the ecological technology in post-humanism world will have been active the potential ability of human’s brain. As we know today, brain of human just been development 10% in our whole life. Therefore, in the future, there are one cyber brain will be invented. The concept is implant one SIM card in human’ brain to linking people’s  nerves system. Which could connect the people’s brain collecting to the digital network.。

Therefore,  Cybernetic Transformer Office could communicate with people directly through cyber network and collect the information from each worker in this office building , comprehensively analyzing the data of the user’s request and the context environment. Ultimately, the building will be a real- time transformer to organize the the best options for each space in the building.