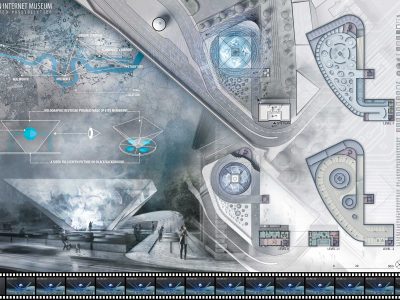 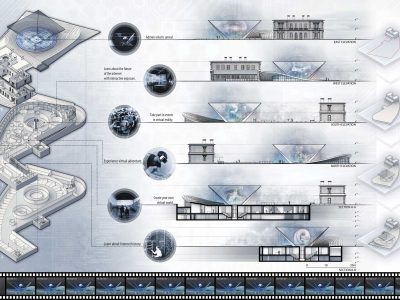 What should an Internet museum look like? The name itself sounds like an oxymoron and suggests an unconventional approach. It should certainly not be merely a collection of exhibits enclosed behind glass, acting as silent witnesses of history. Like the Internet itself, it should be surprising and attention-grabbing. Always within an arm’s reach and ready to connect, pulling the visitor into its unfathomable interior.

This is why the building I have designed captures attention from afar – with light, movement, and a sense of augmentation of what we have known up until this point. The most distinctive, iconic feature of the building is the hologram generator rising from the ground. Visible from a large distance, it is shaped like an inverted truncated pyramid and uses the Holho 4 Faces technology, brought to an architectural scale from palm-sized smartphones. This is the first nod to our daily use of this modern Medium. The second one is the fact that the entire exhibition area is hidden underground, which is a metaphor for the visibility of the Internet. Usually, we only notice its tip – glowing, holographic, closely emulating reality – often forgetting about its immeasurable resources hidden in mysterious, nearly mythical server rooms, which most of us will probably never see. Here, however, things are different. This time, the ephemeral, visually appealing landmark invites us inside, opening its virtually limitless resources before our senses.

We enter the museum through the main entrance, located in the historic Woolwich railway station building. It is a tribute to a place that was a synonym of connectedness and modernity in the bygone era of an industrial society. Today, living in an information society built on foundations laid by previous generations, we enter the museum of the Medium that redefined communication through the same door our predecessors used to walk through, perhaps on their way to hard physical labour. We, in turn, set out on a journey to an inexhaustible source of information – the fossil fuel that powers our minds.

We descend below the ground to immerse ourselves in a museum exhibition worthy of the 21st century. The exhibition as a whole is based on the same principle as the Internet itself: it is an interaction between the Internet and its audience. Each visitor is a host who has the ability to interact with the server and use its vast resources. Thanks to VR technology, the user gets a chance to experience particular historical events or view invaluable exhibits, including ones located in remote parts of the world or even no longer in existence. The issue of storage and availability of works of art becomes completely abstract as well: here, they can be used without any limitations in terms of time or space, which often are the main barriers for traditional museum exhibitions. Another innovation brought by the technology is the ability to remotely experience a music event or take a step inside a painting: something previous generations could only dream about.