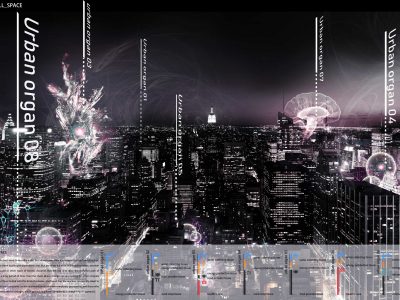 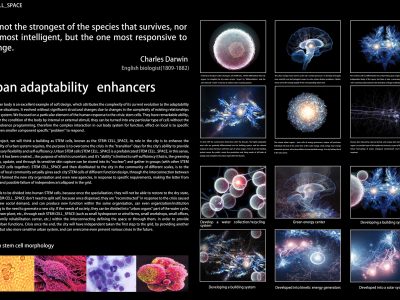 In this project, we will think a building as STEM cells, known as the STEM CELL_SPACE, its role in the city is to enhance the adaptability of urban system requires, the purpose is to overcome the crisis in the “transition” days for the city’s ability to provide the necessary flexibility and self-sufficiency.

Urban STEM cells STEM CELL_SPACE is a prefabricated STEM CELL_SPACE, in this sense, even after it has been created. , the purpose of which is uncertain, and it’s “ability” is limited to self-sufficiency (that is, the greening its energy, update, and through its sensitive skin capture can be stored into its “nuclear”) and gather in groups (with other STEM CELL_SPACE cells together). STEM CELL_SPACE and then distributed to the city in the community of different scales, is to the problems of local community actually gives each city STEM cells of different function design, through the interconnection between them and formed the new city organization and even new agencies, in response to specific requirements, making the latter from the rigid and possible failure of independence、collapsed in the grid.

And needs to be divided into human STEM cells, because once the specialization, they will not be able to restore to the dry state, city of STEM CELL_SPACE don’t need to split self, because once dispersed, they are “reconstructed” in response to the crisis caused by the new social demand, and can produce new function within the same organization, can even organization/institution according to the need to generate a new city. If the needs of society, they can be divided into “urban organs” part of the water cycle, a solar power plant, etc., through each STEM CELL_SPACE. within the interconnecting defining the space or through them, in order to provide greater urban functions.